CAN YOU USE AN ELECTRIC RAZOR IN THE SHOWER?

Most people like to shaving during the shower which makes the facial hair much softer and it can be cut quite smoothly. But if you’re using a low-quality razor, it might be irritating your skin so you should choose the best electric razor.

Can I use an electric razor in the shower?

Yes, there are many cordless electric designs that can be used during the shower. Even it wouldn’t be hurt on your skin; all you need to make sure that shaver should not be used when your plugging has on. Here we’ll let you know some advantages and disadvantages about how to shave in the shower by using the electric razor and we’ll also share some amazing tips and tricks that will help you to shaving in the shower.

Wet shaving vs dry shaving is quite critical matter for many decades. We have got many reviews; people have been asking the same questions. Should I use an electric razor in the wet shower? Yes you can use it during the shower as many People have been struggling for many years and keep finding the different ways for this. As we all are getting modernized day by day, so every men and women want to shave their hair that increases their personality. So here our electric razor plays a huge role to grooming your look. Even it helps to remove your unwanted hair from the body.

How does an electric razor work?

An electric razor is based on two parts that usually perform to cut the hair, first one is a perforated metal foil and other is “undercutter” which is a set of small blades that usually connect with the razor when moving the blade. While you’re working on an electric razor, your facial hair has been cut between a pair of oscillating blades that’s really helpful. When blade meeting with your hair, it usually lifts the hair upwards from its follicle before going to shave it off.

The elasticity of your skin gives you a better shaving experience with an electric razor. Similar to the waves that form on a ship’s bow, an electric razor moves in similar ways. The foil presses firmly against your skin and moves it around, allowing your hair to be much more exposed to the holes in the foil.

Why is it important to take a shower before shaving?

Showering with hot water is recommended before you’re going to shave, as it prepares your hair for shaving. You will feel softer and more able to cut hair after using warm water. It is a very effective method for getting rid of excess oil, dead skin, and dirt.

Before shaving in the shower with an electric razor, always make the necessary preparations. If you have dry skin on your face or neck, use an exfoliating or cleansing gel. As a result of the steam from a shower, the pores of your face open up, relaxing them.

If you are shaving, do not use a spray can of shaving cream as its moisture and lubricating properties are poor. They contain harmful chemicals such as alcohol, paraffin, fragrance, and preservatives which cause irritation. Your skin will be conditioned, hydrated and soothed when you use a good shaving cream.

As a result of the ingredients in shaving cream, the cuticle on the hair swells and absorbs water. Flaky skin is prone to razor burns and irritations.

Since the razorblade is not in contact with the skin, no lather is needed as a cushion. It is harmful to use too much lather. You will end up lathering the lather all over your face and creating a barrier between your skin and the electric razor if the lather does not have enough water.

Some necessary preparations before a wet shave using an electric razor:

Shaving cream in a tube is soft and easy to use. Shave cream can be taken from an almond-sized dollop or from your palms. Building lather doesn’t require a shaving brush.

Then rub your hands together vigorously after adding a drop of water to the cream. It takes about 30 seconds for a thin creamy lather to form. Rub it into your face and lift the stubble upward, rubbing against your hair’s grain.

You should wait from two to five minutes after applying lather to use an electric razor. To dampen the lather if it becomes too dry, run your hands over your beard. Be sure to use your free hand to decide which direction you want your beard to grow.

After you shower, your pores will start closing up, so pick up your electric razor immediately.

Shaving in the shower Vs shaving at the sink: 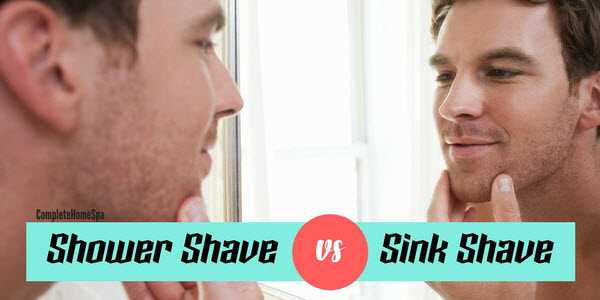 Taking a shower and shaving at the same time can help you save a lot of time. It is best to use water-resistant electric razors in the shower since cartridge razors and straight razors can be tricky to use because of the other items needed such as the shaving brush, lather bowl, pre-shave soap, etc.

The process of shaving at your sink doesn’t take more than 30 minutes. These are particularly useful for those seeking to save water. If you prefer a dry shave, you should stand in front of the mirror and thoroughly rinse your electric razor head.

At the end, it must be said that YES, without having a fair you can use an electric razor in the shower. Cordless units are much safer than corded ones. Avoid getting your electric razor close to water if you are using one that’s how you can safely use it for a long time.

How To Sharpen Electric Razor Blades – Things You Need!